You are here: Home / Social and Moral / The Interview !! 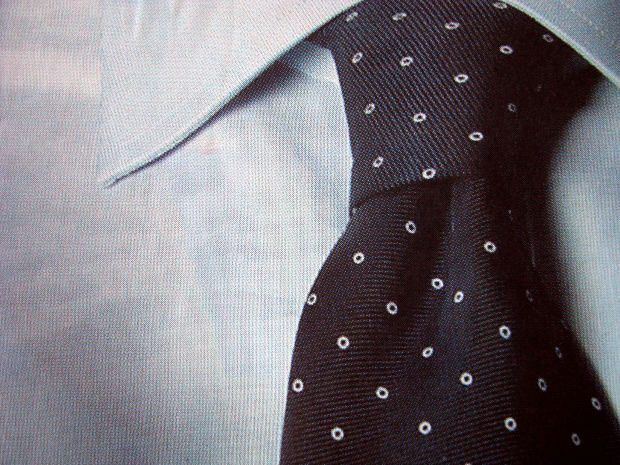 BEING JOBLESS FOR A LONG TIME. Tarun is a middle class boy who is an aspiring Graphic Artist. He has been searching for a job for along time. He found some small time jobs now and then but left them too as he thought they had no growth.  It was mid day inside tarun’s room. It was dark and lit by sunlight  penetrating through the ventilation gap. The room is messy with all the cloths spread along the floor and the bed is covered with junk food scattered all around. Tarun slowly flexed his muscles and got up and sat in the bed. With half eyes closed He placed his hand in the bed and searched for his mobile. It was underneath the pillow and he checked it to see for and missed calls.

There were two missed calls, one from his friend and the other is unknown number. He knows the reason for his friends call so he called the unknown number to see who it is. He dialed the number and kept the mobile in his ear and went back to bed again.

” Hi Tarun , I called regarding an opening for Graphical Artist in our company and your profile seemed to be perfect. ”

“May I know which company ” asked Tarun

The HR stated the company name and said its an MNC company and located in Banglore.

” We would like you to come to our company for a test this Friday, is it possible ? ” asked the HR. ” yes I would gladly be there , just text me the address ” said Tarun.

Tarun was very exited as he got a call for interview in a very long time. And He did some research about the company and got really good feed backs. He got up washed his face and stood in front of the mirror and gave himself a smile. Friday is just two days away so he has got to prepare. So he spent the next two days brushing up his Graphic skills in computer. He went and booked tickets in bus up and down.

It was Thursday  evening and He packed fully and left to the Bus Stand. He reached 30 min earlier just to make sure everything goes according to plan. There was a place to sit and He went there and removed his backpack and sat there. After 45 min His bus came and He got in and searched for his seat . He was holding the ticket in his hand went to his seat where already  his co passenger has arrived. He placed his bag on the top and made himself comfortable in his seat. His co passenger who is almost as the same age as Tarun was speaking on his mobile. Tarun’s was  starring outside waiting for the bus to start. After 30 min the bus started to move very slowly making sure all the passengers are set . By that time His co passenger ended the call and said a silent Hi to Tarun. ” Hi ” Tarun replied back with a gentle smile.

” Do you have any Idea when it will reach Banglore ” asked his co passenger. ” By six probably ” replied Tarun.

” Are you a native of Hydrabad ” asked Patnaik

“I am from Pune. I came here for an Interview ” Said Patnaik

” Not as I thought . But I still have two more Interviews , one in Banglore and Chennai. So I think one of them will click ” said Patnaik with his fingers crossed .

” How come you get so many  calls for Interview from different places ” asked Tarun puzzled.
“Who said I get call letters , I check for companies that deals with my expertise and I update my resume and go directly to the companies and hand out my resumes.”

Tarun shocked asked Patnaik ” Can we really do like that ? ”

” Yes , they keep it for future reference and when needed they call us or lets Hope they call us ” said Patnaik.

” I never thought of it that way . Actually I am on my way to an Interview too” said Tarun.

They both spoke for another half an hour and Patnaik went to sleep. For Tarun is thinking of how to attend the interview the next day. It was getting late so Tarun also went to sleep.

THE SUN SHINES. Tarun could not wake up he is still very sleepy. But Patnaik was awake and looking fresh. He poked Tarun to wake up but he did not. So he waited for him to wake up on his own. Meanwhile Patnaik took his phone and started to speak to his girl friend. He  spoke for almost 20 minutes. Hearing the sound Tarun woke up. Tarun woke up with eyes still crying for sleep. He admired the sunlight flashing on his face from time to time on the moving bus. He slowly opened his eyes fully and tried to analyze where he is right now. ” Good Morning Friend !!” said Patnaik while speaking with his girl friend. And Tarun just shook his head and gave a blind smile. ” Do you know where we are ?” asked Tarun. Patnaik putting his girl friend on hold again said ”  In 20 minutes we will be there “.

Finally the conductor  called for the persons getting down at banglore. Tarun and Patnaik took their backpacks and came in front of the bus to get down. The bus was shaking rigorously that they have to hold onto the support tightly. While both of them shaking and struggling to stand comfortably Patnaik asked ” Where are you going to stay ? Are there any relatives here for you ? ” .

Tarun did not actually want to answer that question honestly. ” No actually I am not staying anywhere , just freshen up in bus stand and have a good breakfast somewhere nice and leave for the company . Whats your plan ? ” asked Tarun.

” Well I don’t have a plan in particular. I will go to at least 8 – 10 companies. That’s my target today. But anyway I think You should note my mobile number in case you need anything”.

” I don’t think it would be necessary , I would probably leave by today evening itself”. Tarun lied.

He knows that it is a 2 day interview and yet he lied because he thought he would be disturbed during interview or he would come and stayed with him. ” I insist you give me your number . I wont disturb you, its just to remember by ” Patnaik told. Then Tarun gave his number and Patnaik noted it down and gave a missed call to Tarun and said ” In case you need you can call me, I will be here only for the next two days”.

They got down from the bus and shook hands and  greeted each other all the best. Tarun was thinking of booking a room and freshen up , so he went straightly looking for lodging places. He turned back and checked weather Patnaik is gone or not. “Oh God he left ” thought Tarun.

Inside the lodge Tarun is getting ready and tying his shoe laces and suddenly he hears the sound of his mobile message tone. He took his mobile to check who it is and it was from Patnaik . The message read ” CAN V MEET TODAY EVENIG FR DRINK ? LOTS OF GUD PLACES IN BGLORE ! ” Tarun saw it and did not respond . For him its not important now.

Tarun eventually got ready and boarded a bus to the company. He was fresh and positive all along. He reached the company by asking address from strangers.

It was two tall 10 story buildings with a huge  entrance . There were lots of people dressed formally . All coming in groups and smiling and chatting. And some coming with frowned face as though they did not want to work at all. In the entrance there was a security checking place where they check for the ID proof and if a person is coming for interview they ask ” which company ”  and give them visitor tags. Tarun was standing in front of a tall man in the interview line.

“Which company are you here to attend the interview for ? ” asked the security.

” Tridant Solutions ” Tarun  said and she gave me the visitor tag and he slowly started walking forward giving way for the others. And the security asked the same question to the next guy who is coming back behind Tarun.

” Tridant Solutions ” the other guy answered. Tarun  was surprised to know that his possible competition for the post is just behind him all along. So he slowly turns back to see who it was.

Tarun was shocked and was standing like a stone in that crowded place with eyes wide open in surprise.

“Patnaik what are you doing here and you were saying the company name I was supposed to go ! ”

“Ya I did because I am going for that company only !” said Patnaik  with no remorse. And they started to walk forward giving way to others.

” You were with me throughout the travel yesterday and did not bother to mention that ? ”

” Tarun I know that you were going to the same company as mine when you were reading your mail copy of call letter . But I did not want to mention that I am going there too. This company is just one on my list and I did not want the thought of competing against you  to ruin our travel ,Or else we would not have a good time chatting” He said with little smile. ” Anyway I am just here to give out my resume and will go soon ” . Tarun was clueless and trying to figure out weather what he said really makes sense. ” What , are you ok  ? asked patnaik.

With a soft  smile Tarun said ” Its OK buddy , All the Best “. They both smiled and went inside the company together. Every thing went well and Patnaik as said gave out his resume and left. Tarun finished the  interview and was very satisfied with it as he got a positive feedback from everyone there.  And he was told to come again next week to sign contracts and all formalities. It was a happy day for Tarun as he had a long period of unemployment.

Tarun went to his room that evening and sat on his bed and was just starring at the floor thinking how lucky he was and also thinking about the smile it will bring to his parents hearing the news. So he called his parents and informed them and they wished him good too. He stood up and took his mobile to message his friends that he got the job. And he accidentally saw the message Patnaik sent  ” CAN V MEET TODAY EVENG FR DRINK ? LOTS OF GUD PLACES IN BGLORE ! ”

And Patnaik replied instantly ” THANKS FOR REPLYING FRIEND . WILL CALL YOU NOW ”

And there starts a beautiful and lasting Friendship ………