You are here: Home / Suspense and Thriller / Tom 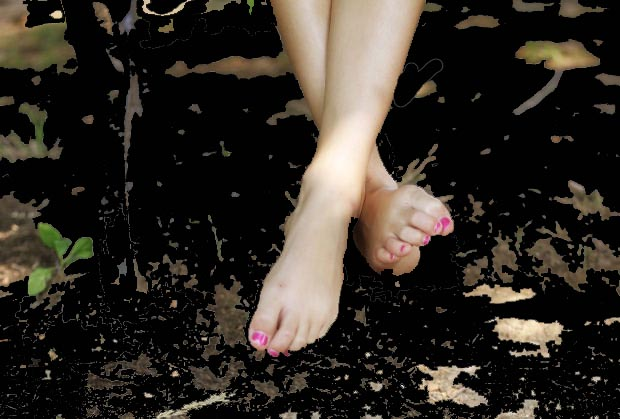 Tom used to always enjoy his days coming home from work. With traffic, noises, or weather, he always listened to everything going on around him. He would also look around to all of the different cars and trucks around him, and also at their drivers…some he knew and some he was used to and others he has never seen before and may never see again.

Another driver was also on the way home from from work. She has just started and also just moved into the area, so she just became familiar with her drive home. She has also noticed Tom recently and started smiling when she saw him; she figured she was driving the right way if she saw him every day.

One day they did drive next to each other while the sun beat down and definitely enabled everyone to remember that this was the first day of summer. Tom didn’t notice her as quickly as she noticed him.

“Hey there!” she said as the hot traffic moved liked snails and smelled like tar, “is your AC working?”

Tom never really spoke to anyone before, he would just wave hello or say hi; sometimes he would sing along with his radio or others with their music! This time he really didn’t know what to do.
“Uh…hello?”

She heard how Tom sounded confused…

“Hey, we’re moving slower than normal today. Let’s talk, or sing something. What station do you have on?”

“Um…I…um…” Tom was frightened about actually speaking to someone, “…I normally don’t speak while I’m driving.”

“Oh,” she said, “well you have your window open. I thought you would be easy to talk to.”

“We’ll I don’t know you…do I? Have we met before? Do you know me?” …with all of his questions, his talk to a stranger did become audible and seemed more thought of like normal speech patterns, “…who are you anyway?”

“I’m sorry, I’ve seen you here often since I moved here and thought we knew each other. I’m Amanda. What’s your name?”

Amanda and Tom started yelling back and forth every day after that first time the traffic was baked this summer. They really seemed to get along while next to each other in the rush hour traffic. As the summer moved along, the two of them started to call each other from their homes and eventually started to hang out together.

One night while they were hanging out, Amanda started questioning him.
“Hey Tom”
“Yeah, what is it?”
“Would you like to come over tonight?”

After her question Tom just stopped breathing for a second or two; however, to him it felt like an hour or two…

He answered back, “Um…I have to work tomorrow, so maybe later, but not tonight. How about this weekend or another time without work tomorrow?”

She started to giggle, “Tomorrow is Saturday. Are you alright? Am I asking too much? Is this weird for you? …or with me?” The giggling had stopped by now.

Tom answered sort of surprised, “Oh it is?!?! Um… Look I’m sorry. I didn’t even think about that. I was a bit shocked since YOU asked ME over for…ummm…the night.”

Tom just kept talking. It almost sounded like he talked and spoke over his own ‘worried’ tone of voice. Amanda definitely noticed how he was speaking and what he was saying, but she just grabbed his hands and kissed his cheek.

As the night came closer and they drove back to her house, Tom started thinking that something was weird here. Somehow, he didn’t think that he knew Amanda very well, or that they were together long enough to push themselves to the next level of dating, but he then thought that maybe they were just good together. Maybe things were just right!

As they got to Amanda’s house, they parked on the curb instead of her garage. Tom didn’t say anything about that, he just noticed it…then back to his happy and excited thinking.

She opened the front door without her keys because she did not lock her door. She told him that she doesn’t need to lock it. Even if she goes out for the entire weekend, she does not lock it. She said to Tom, “no one has ever come in here except for me.”

As they walked into the living room, Tom noticed boxes all over. All filled and heavy and some were laying down and opened up.

He did ask with a bit of a giggle, “Hey, are you still moving in?”

“Just sit on the couch. I’ll be right back.”

As Tom sat on the couch, Amanda walked up the stairs and a door closed. He assumed she was in the bathroom or her bedroom…”Gotta be one of the two,” he thought.

While she was up there, Tom started to see some of her pictures in the open box laying on the ground. He decided to look at some while he waited for her.

As he started looking he did notice some different hair colors…at least that’s what he noticed in the darkened room. All he did was pull his cell phone out of his pocket and hit the light button on his phone. As the light came on, something different was seen on the photos.

Not only was her hair different in each of her photos, but so were the groups of people she was with…including guys that had their arms around her…and as he looked on the backs to see the names or if they said brothers or cousins, it only had one female name on it.

“I’ll be right down, just give me another minute,” she yelled down with a high pitched voice instead of a lower, interested, sexy sounding voice.

As he looked at a few more he found her with red hair. On the back was the name Michelle, and it was also on the next photo which was now one of the guys from a previous photo laying on the ground with blood across his neck.

The next two photos were named Nicole. The first one included blonde hair as the second one had another man that looked like a guy from another photo. He had blood coming from his right ear as he was laying on his left side.

Two of them were using the name Lucy with another dead man.

The third picture was one of her with dark hair. It looked like her hair now! Also the man looked familiar. On the back, the name she had written was Amanda.

“Here I come,” he heard from right behind him…