You are here: Home / Suspense and Thriller / The Forgotten Hero 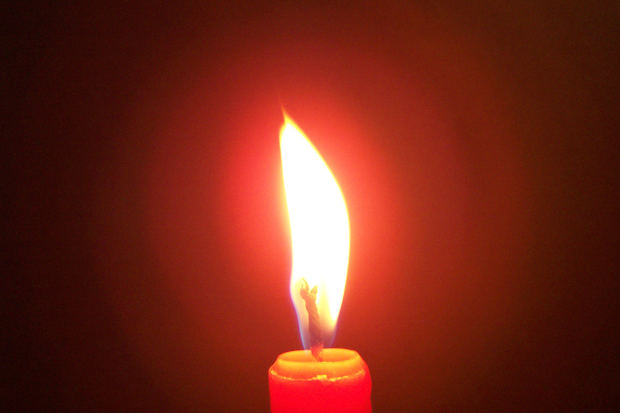 September 21, 1969
Tension was at its zenith in the latter hours of the day whole over Ahmedabad. Following the riots that had broken out as a result of what may be dubbed as a nature’s mistake at the Urs festival, it had turned itself into the most devastating event of communal violence since Independence that had gripped the whole nation with fear.

Scattered incidents of violence were reported from Jamalpur, the epicentre of the riots, despite of the curfew being imposed there. Both the communities, hungry for revenge had come on the streets, resorting to killings, arsons and loots. Lack of police force and administration at this juncture had further facilitated the crisis. It was even conspired that this whole catastrophe had been deliberately cooked to topple the Hitendra Desai government then.
The area being a Muslim-dominated one, witnessed a huge number of murders of the same, coupled with an equally large exodus within few days. Still, majority of the population stayed there, thus acting as a mole in the eyes of the staunch Hindu extremists.

Amongst all this, news floated in air of the Bharatiya Jana Sangh planning for a bloodier path of revenge. Inside sources had confirmed of serial bomb blasts intended to ravage the mosques and shrines of the Muslims with a view to kill those who had taken refuge in there. In spite of this high-alert, no security forces were posted in the area.
Meanwhile, in a small motel in Vadodara, a dark, sturdy man somewhere in his mid-thirties was getting prepared for the task he was entrusted with. He very well understood the gravity of the situation and didn’t forget to double-check himself. I am a complete masterpiece, he said staring at his new look in the mirror. Half an hour later, he left for his mission.

Soon after the situation being brought into control, newspapers reported of three bombs being defused from around the local mosques, thus saving the lives of hundreds who had stayed back in there.

Locals credited this new life they had achieved to a never-seen-before brother of their community who lived with them for two days and then disappeared all of a sudden. The suspicion without any doubt pointed it to be an ‘inside the intelligence’ job.

Enraged by this last minute failure, the radical Bharatiya Jana Sangh began a manhunt for this official. Word had it, that the radical Hindu group had even bribed higher authorities for turning him down to them. Soon, his family and their whereabouts had been traced and were found to be murdered, thus putting the whole blame upon the minority community.

In the meantime, this man had completely evaporated into the thin air, leaving not a single trail behind him.

Regardless of what the man had done to save the lives of so many people, the then corrupt Government forced its whole manpower in hunting him down. In spite of that, the best of the Intelligence Bureau’s assets couldn’t track him down. Ultimately after three years, the whole case was dissolved after the dawn of the new Government.

Fifteen months back, since the day he landed up in one of these filthy, browbeaten, congested suburbs of Ahmedabad, it seemed to have nurtured its way into a new beginning. A new excitement.

Such had been the charisma of Rahim Chacha. Or simply, Chacha, as the kids used to say. No one had an idea of his exact age. And no one ever even bothered to find out. A sort of a madcap, as some dubious ones would tag him, but to the masses apart, he was no less than a reverend.

Staggering in his long weak legs, he would roam around Jamalpur and the adjoining areas every morning. It seemed as if he was too well versed with the place since ages. In the evenings, he would very willingly greet and help solve the problems of whoever approached him. Talks of his foresight and philosophies spread like flames to the adjoining areas and ignited the young minds.

In the hearts that once housed the cactuses of religious fanaticism in this Muslim-dominated community, he sowed the seeds of brotherhood and benevolence. Owing to his encouragement, the so termed ‘useless’ youth of Jamalpur had come out of their slumber to fetch their own existence, their own respect.

This man with the never-ending thought of ‘serve the nation, no matter what it renders you back’ had soon grown into a chosen Messiah. His roadside shabby tinned dwelling had transformed into the common man’s dargah. That enraged the orthodox Maulvis who had been feeding themselves on the emotions of the people since aeons. Paradoxically, the more he was ostracized by these fanatics, the more love and sanctuary he gained from the hearts of his children.

‘My blessings are always with you, my children. It has been with you since last forty years’ he would say smiling mysteriously, leaving everyone perplexed trying to get hold the meaning of it.

I also happened to meet this man once, owing to my wife’s insistence. Not an ardent follower of such crazy street-side quacks, but I still remember the day I presented to him with my worries. Looking in his eyes itself could shove away half of your concerns. There was a unique radiance in his senile eyes, and beneath that lay an unexplored abyss of mystery and fear.

And they did remain hidden, until that ill-fated day…

That morning, whole Jamalpur woke up to the worst day of its history. Residents stared in grief and disbelief at the burnt heap of debris stacked at one of the corners of the street. It was Rahim Chacha’s small hut, almost burnt to ashes. It was hard to contemplate the emotions that had been racing inside every Jamalpur fellow’s heart.

But there was one question that was storming inside everyone’s head at that time. Where the hell was Rahim Chacha? Where did he disappear? Did anything worse happen to him? Obviously, he didn’t possess any riches for which someone would have plundered his hut. Or instead kidnap him for arson.

Many of his belongings failed to catch fire and they were seized by the police for further investigations. Whole matter was covered up underneath a dark veil, leaving us with no clue as to what actually happened to him. This started a sort of a revolt within Gujarat.

Finally some three months later after a lot of petitions, strikes and media sting-ops, the whole mist concealing his sudden disappearance had finally cleared.

After this revelation, the religious fanatics like always returned to label him as an epitome of sheer debauchery and betrayal. But for every other heart watered by his kindness, and now overwhelmed by his past history, he had earned a lot more respect than earlier.

People still wake up today from their bed anticipating seeing the man who had given them another life forty years back. But that could never happen.

He was still on hunt. And he still managed to evade.

For his predators and their files, he was Gen. Naresh Sekhawat.

But for us, he’ll always remain our Rahim Chacha.”

**** Salute to the Forgotten and Unsung Heroes of our Nation ****