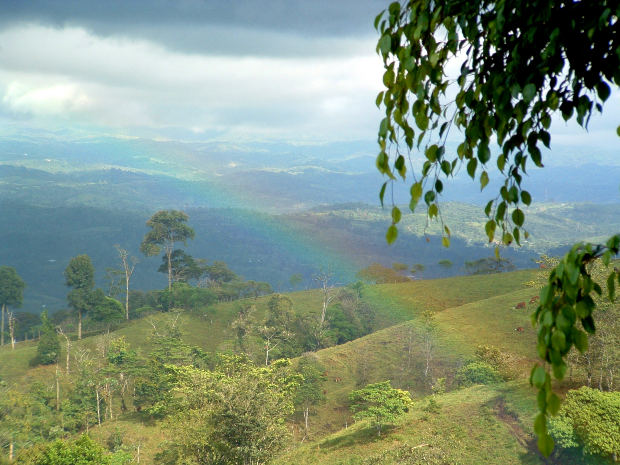 Three weeks back, when I went in search of a ‘Goat’ to a quaint hill station, called the ‘Lansdowne’ little did I know that I won’t get to see either of the two, neither the goat nor the hill-station.

While starting from the Country Capital by train on a seven hour-long journey, I formed various images of this hill-station and the story related to Garhwal Rifles and it’s mascot ‘the goat’, there. But instead of salubrious weather and pristine environment I was greeted by the scorching heat, April turned out to be the cruellest month, even on the hills. The picturesque and plush landscape did not welcome us , but instead, the monster sized water tankers covering almost the entire roads of the hilly terrain greeted us, they were lined-up for their turns to fill up, that too, from the water coming out of the natural streams. All this was to, cater the hotel industry. Yes the natural water resources here are being used to an extent , till they are depleted and the human hunger and greed has filled to the brim but still want more.

The construction work was in full swing , the hotel industry has completely taken over, every nook every corner, the locals either soldiers are serving in the Army or are doing nothing, and their only source of income is the land, they are selling in peanuts to the outsiders in order to fulfill their habitual drinking or alcoholic needs.

Yes one does find hard-working women folk of the hills with cloth tied around their heads and caring heavy loads, full of broken branches or green grass. Tourists pouring in herds beyond the capacity of the hills, and on the other side you witness locals and state forest department setting the edges of the forests on fire without digging any trenches.

Moving further, as the altitude increased, from Kotdhwar , enroute to Lansdowne, along the winding road we witnessed sudden rise in the temperatures as well, some what similar to an ‘Inferno’. Smoke rising from the distant trees, forest all covered in smog and sky glowed red with the cries of the birds. Instead of cool breeze passing by, the air was all warm , rather hot.

When I confronted one of the local Bhula (brother) burning the pine-needles al most in the centre of the road , prompt came the reply that all this was to burn the unwanted weeds so that the roots of the plants and the trees could breathe . So he left it burning with crackling leaves and needles , which soon turned in to cinders and floating on every passer by. Flames rising high with smoke billowed out above the forest and continued to spread.

Some locals tried to convince us with their theory or may be logic that, there was nothing to worry about, as it was a annual phenomena, always happened during the Summers, but the explanation was not convincing and soon the dry, water deprived hills with equally thirsty humans, was now wanting to take revenge and soon the forest-fire went wild , and now the water from tankers was used to douse of this fire. As if sending a message across, that do not dare misuse the natural resources, what we give, we can take back too!!!

Regarding the Goat which has a special place in the Garhwal Regiment, the story goes, that during Anglo-Afghan war, the men of Garhwal Rifles unit posted at Chitral, (now along Pakistan-Afghanistan border) lost there way , and for many days without food or water kept walking and after so many days of hunger and thirst when they saw a goat come out of the bushes, they all decided to feast on the goat, but while they were thinking of doing so, the goat started digging the ground, out of which came out the potatoes. As soldiers witnessed all this , they too started digging the ground , which turned out to be a potato field instead, as retreating army had burned the potato fields, so that the advancing army does not get anything to feed upon. But the discovery of the potato field by the goat made the men of Garhwal Rifles indebted to her. As the goat had accidentally saved so many lives. And so they brought the goat with them to Lansdowne. This was long time back, but it is said that the goat is still there at Lansdowne with the men of the ‘Garhwal Rifles’ in the form of a statue, made through the process of ‘Taxidermy’.

But the search of goat proved futile for me , as in the Mess of the Garhwal Rifles I could find a lot of animal heads but not the statue of the saviour goat.

But, never mind as I was actually privileged and honoured to see the Victoria Cross , given to Rifleman Gabbar Singh for his courage and bravery , a soldier in Birtish-indian Army during World War 1.

Moving further, now it was the time to enjoy ‘Lansdowne’, earlier known as ‘Kalu Dhanda’ which means ‘Black forest’, but later its name was changed to Lansdowne, after the name of erstwhile Viceroy of India, Lord Lansdowne.
But before the forests in hills actually become black, it is high time to take action, before the life saving ‘flora’ or ‘fauna’ disappears and our Natural Resources become the “scapegoat” of our misdeeds.